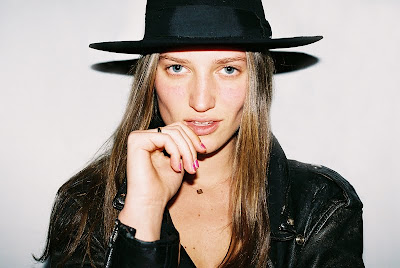 Michele Ouellet and her mother, Mindy Kearney, who is a wine marketing consultant, have been partners in making Lorenza Rose wine since its first vintage, 2008. On April Fools Day, they will release their third vintage.

Ouellet’s father, Michael Ouellette, got the two started by introducing them to growers and the logistics of winemaking. Today, his daughter said, “His love of rosé and great palate has been inspiring.” Michael is in the wine-by-the-keg business (VinTap). The family has been in St. Helena since 1993, and before that was in Yountville shortly before Michele was born in 1988.

The partnership between mother and daughter is likely to be long-distance, since the 22-year-old Ouellet has been an international model since she was 15. In January, she was in town joining four other next-generation winemakers at a tasting and conversation at St. Helena’s 750 Wines. The stories of the other winemakers, Rob and Angelina Mondavi and Tony Leonardini, will be printed in future editions of the St. Helena Star.

Days after the interview, Ouellet — she changed her father’s name slightly for her modeling career — was in Bahia, Brazil, for a photo shoot for one of her favorite clients: French Cosmopolitan. By email, she said, “It’s incredible here!” She models everything from clothes to swimwear, jewelry and beauty products in magazines and for advertising campaigns as well as some runway work. She said, “So much of my work comes out in Europe, so I am really excited to be on the cover of Travel & Leisure’s February issue.”

Ouellet and Kearney will release 943 cases of their 2010 vintage on April 1. The wine was produced from mourvedre, cinsault, Grenache and carignan grapes grown in Lodi. The vines are between 60 and 113 years old. The wine is produced in Lodi.

Ouellet talks about her role in Lorenza wine: “I am in the vineyard before harvest, tasting the grapes for ripeness and then all the way through harvest checking on everything. I make it a priority to be as hands-on as possible during the blending process.” This year, too, she had returned from Brazil to be involved in the bottling. She is also involved in the label design and “other collaborations, including our upcoming T-shirts.”

“I handle our social media from wherever I may be working out of town,” she said. “When I’m in the valley, I make deliveries, organize our parties and visit our restaurant and hotel clients. It’s been a lot of fun to host parties supporting my friends in the fashion and art businesses in New York and Los Angeles.” She said she loves bringing her two worlds, modeling and wine, together.

“I have found that the wine business and the modeling world are very complementary and am so pleased with the balance it provides me,” she said. “Even though I travel the world modeling, I cannot express how happy I am to call St. Helena home.”

The back story of Lorenza — that one of its partners is a world-hopping model — is appealing. “On the other side, more and more clients are interested in working with me because I have an interesting business outside modeling,” Ouellet said.

Item(s) have been added to your cart.

Review your cart
We use cookies on our website to give you the most relevant experience by remembering your preferences and repeat visits. By clicking “Accept”, you consent to the use of ALL the cookies.
Do not sell my personal information.
Cookie SettingsAccept
Manage consent

This website uses cookies to improve your experience while you navigate through the website. Out of these, the cookies that are categorized as necessary are stored on your browser as they are essential for the working of basic functionalities of the website. We also use third-party cookies that help us analyze and understand how you use this website. These cookies will be stored in your browser only with your consent. You also have the option to opt-out of these cookies. But opting out of some of these cookies may affect your browsing experience.
Necessary Always Enabled
Necessary cookies are absolutely essential for the website to function properly. These cookies ensure basic functionalities and security features of the website, anonymously.
Functional
Functional cookies help to perform certain functionalities like sharing the content of the website on social media platforms, collect feedbacks, and other third-party features.
Performance
Performance cookies are used to understand and analyze the key performance indexes of the website which helps in delivering a better user experience for the visitors.
Analytics
Analytical cookies are used to understand how visitors interact with the website. These cookies help provide information on metrics the number of visitors, bounce rate, traffic source, etc.
Advertisement
Advertisement cookies are used to provide visitors with relevant ads and marketing campaigns. These cookies track visitors across websites and collect information to provide customized ads.
Others
Other uncategorized cookies are those that are being analyzed and have not been classified into a category as yet.
SAVE & ACCEPT
Skip to content